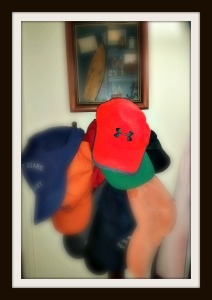 One of my loyal readers (no…it wasn’t my mom; It was the other loyal reader) pointed out to me that my tagline indicated a proclivity for hats, yet there was nary-a-hat to be seen on my site. Well, not wanting to disappoint half of my viewership, I thought I’d occasionally showcase an actual hat while I ramble about its metaphorical position on the rack.

The pic–to the left–is the hat rack that sits inside our home’s front door. On it, I see (through the artistic haze) a hat that I wear when I’m with the Coast Guard Auxiliary, a couple of concert hats (Jimmy Buffett and DMB are in there), at least three Put In Bay hats, my I Believe In Santa Claus hat (boy, is that one a post in itself), and the hat that’s been brought most into focus: the Under Armour runner’s hat. I thought the last one in the list was the best one with which to start, as it hits on a couple areas in my tagline.

A future blog post will go into depth with when and where I started running (spoiler, it wasn’t until I decided to quit smoking), but this post is about wanting to change my tagline. You see, Musings of a Chubby Barefoot Runner and Hat Aficionado sums me up, nicely; however, I’d really like to put a line right through Chubby. I don’t want to get rid of it, altogether. I want it to remind me, every time that I look at my blog, that being the gluttonous lazy slob that I was had consequences and I need to be a better role model for my boy. But, I also need to remind myself that the best role model I can be is to be happy, healthy, and successful and let him see me and aspire to be the same.

I figured out, a couple of years ago, something profound about the saying I wish I knew then what I know now. You know what it was? It’s the same thing we’ve heard all our lives: learn from your elders. That is the time-traveling wonder that we all have at our fingertips, yet most of us don’t see the power in listening and learning from the mistakes our parents made. I know that making your own mistakes is vital to becoming the adult that you will one day be (at least, I’m guessing that will happen if I become an adult), but I also have to wonder if some of the more successful society members learned early on how important it is to see the future through the eyes of a parent’s past.

So, there is the hat of the day. I wear it when I slip into my Be Healthy and Live Longer mode; however, it also serves as a reminder that what I know now only happened because of everything I was then.

2 thoughts on “Musings from The Rack” 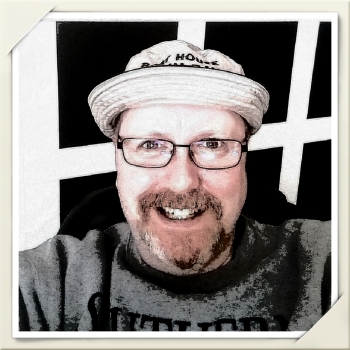